War of the worlds

October 30, 1938, at 8 p.m.. It was almost supper time, and many New Jersey residents had their radios turned on. Usually at that time the announcer talked about the latest political, cultural and stock exchange events. That evening , however, the residents heard a completely different announcement.

In fact, the news broadcast mentioned strange explosions observed on Mars. It was followed by the report on a mysterious object that fell on a farm in New Jersey. Then, a music program was played, which was interrupted by a live broadcast. An account , in which the journalist talked about a cylindrical object landing in grain fields.

It was only worse after that. The residents in front of the radios heard the sounds of  a laser with which the Martians attacked the journalists. Moments later, another reporter described the efforts of the US military trying to stop invasions  in another parts of the country. The highlight was the information about the appearance of a poisonous smoke cloud over Manhattan.

Fortunately, the death toll of the Martian attack was a round zero. The described event was a part of a  Halloween broadcast on CBS. Its author was the writer  H.G. Wells. As it turned out, not all listeners realized that the given content was fictional. A few days later, there was a widespread outrage in the media.

This material went down in history as  War of the Worlds.

Until recently, when you entered the official  brud.fyi website you could only find a text document, stylized as  google docs. It welcomed visitors like this: 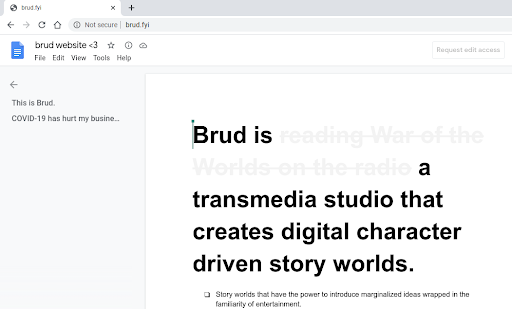 The  Brud company referred to the material broadcasted 80 years earlier on the CBS station. But why should we consider its members prophesying for as an event equal to the arrival of  the aliens? Well, in a way … that’s exactly what they do. However, should the arrival of a new, unknown era be immediately associated with the catastrophe? The Brud company believes it should not, and neatly shatters the prophesy.

So we are left with the description that Brud is a  transmedia studio creating digital characters with the rich past. It sounds a bit complicated, but the key word here is  „transmedia”. It refers to the use of multiple platforms to create a single comprehensive story of a character.

The Brud company creates computer-generated people who can mark their presence in the world in various ways. Nowadays, it can be simultaneous operation on streaming services, social media, advertising, movies, dedicated applications and so on.

People like  Lauren Goldston, who used to work for  Lionsgate or Nicole de Ayora from Vice, are currently employed at the  Brud company. In addition to such famous names, the company has over 40 talented people dealing with every stage of creating the image of their characters. They include graphic designers, writers, programmers, designers and marketers. The first fiddle , however, seems to be played by Trevor McFedries —a music producer formerly known as DJ Skidski; The co-creator of hits for stars such as  Katy Perry and Ke$ha.

Trevor knows how to create an image. So he used his knowledge to bring to life someone who could mess with celebrity social media. And according to his plan, he created a start-up worth $ 125 million today.

If, however,  Trevor was born at the beginning of the 20th century, he would probably be interested in the figure of the sculptor Lester Gaba and his creation  – Cynthia.

Cynthia was a dummy, she  weighed  45 kilos, had freckles on her cheeks and was holding a cigarette in her right hand. You could meet her at New York parties. Sitting there , she listened to the sounds of the gramophone or read a book. Her face was even on the cover of the  Life magazine.

Cynthia was the first non-human influencer. She became the symbol of the dignified femininity of the 1930s. Its fame reached so far that the dummy became an ambassador for brands such as Dior, Tiffany or Cartier. In 1938, she even starred in a  Hollywood movie called “Artist and models abroad” 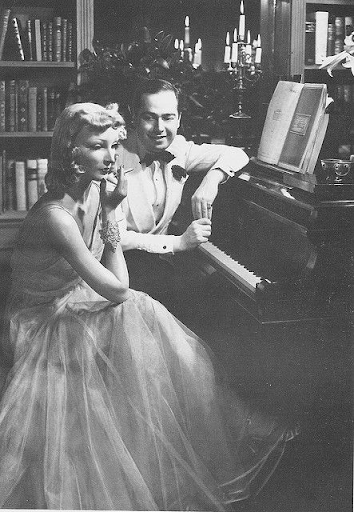 What happened to Cynthia may seem amazing . Why would people actually get excited about a character that is actually dead ?

The answer may be surprising, especially for  42%  of users aged  18-32 who follow a virtual celebrity’s Instagram account. It turns out that this percentage of followers thinks that the influencer they observe really exists.

Lil Miquela and her friends

Miquela Sousa, better known as  Lil Miquela, is the first creation of the  Brud studio. It appeared on  Instagram on April 27, 2016 and has undergone a significant transformation since then. At the time of its creation she was  19 years old. Today, five years later, she is still nineteen. 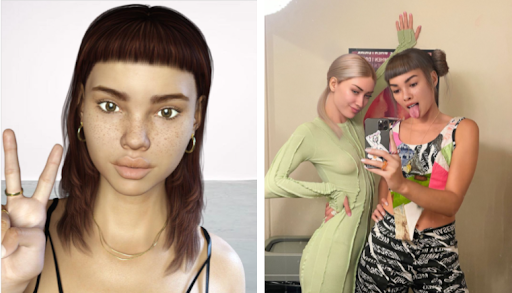 Miquela has become the most important influencer created by  Trevor McFedries company. Today, her Instagram is full of photos with real and virtual friends. Her friends include characters created by Brud — Blawko and  Bermuda,  as well as their  „colleagues” from other studios.  Miquela has gathered a community that is currently observed by over 3 million people

When it turned out that short descriptions added to the photos on Instagram are not enough to create her character effectively, Miquela also became a Vtuberem i.e a virtual youtuber. She started her career on Youtube with a quite intriguing film called „What my dreams look like”. This material, despite its specific content 😉 guaranteed  250, 000 views.

However, her next work was more exact. Lil Miquela started making songs, participating in popular challenges or talking about how she is beginning to understand that her past didn’t really happen.

She also followed in the footsteps of her great-grandmother  — Cynthia. Like her , she entered into cooperation with Dior company. She has also become an ambassador for several other contemporary brands. Miquela could be seen in the clothes of  Prada or Calvin Klein. Recently, she has also become a member of  Team Galaxy created by Samsung.

Miquela, despite her indirect agency , deals with real problems. So she creates collections for the BlackGirlsCode ( in cryptocurrency) and  supports the My friends place organization, which helps young homeless people.

Trevor McFredries mentioned in an interview that he would like to have a chance to make a social impact similar to the Will&Grace series  had in normalizing homosexuality. So, in line with his vision, the influencer on her social media supported for example the  Black Lives Matter and  LGBTQ+ movements. But that’s not all . Around the beginning of 2020, on her video channel appeared a film in which she describes her memory of …..being sexually harassed.

Miquela’s influence is huge. You can even meet her on the street. The singer appeared for example on a billboard in Time Square advertising her latest single “Hate Me”. On this occasion she posted on Instagram a photo from the square where her figure was computer-superimposed on the figure of  Baauer. 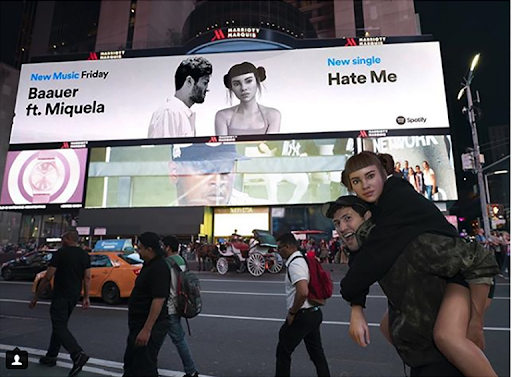 It is possible that the next step towards reality would be similar to the one of another virtual creator — Hatsune Miku. Hatsune played its first concert in front of the real audience in  2009. And it was possible thanks to the… hologram. So we will probably soon see Miquela, interacting directly with her fans on stage.

Why actually virtual and not real?

Everyday new, more and more realistic, or on the contrary totally abstract characters appear. They include the hipster version of  Colonel Sanders  — the founder of  KFC, the alien Galaxia Gram, the big-eyed Noonoouri or the 8ubbles bubble. And it’s enough to visit the https://www.virtualhumans.org website to meet  dozens of other aspiring celebrities. 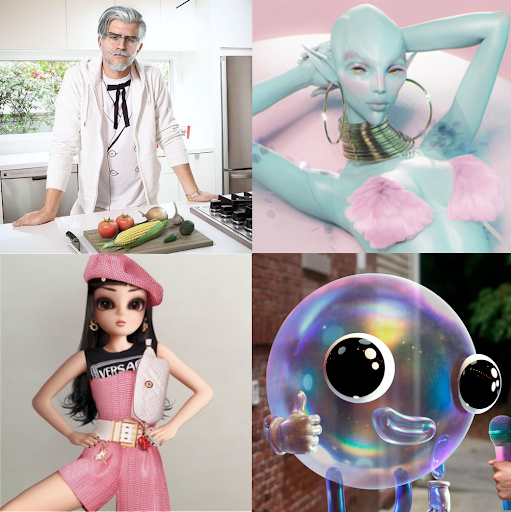 The creators and sponsors admit that  they derive great benefits from working with virtual influencers. Such celebrities are never tired, never whine and perform their tasks without blinking an eye. Additionally, they do not have high demands when it comes to payment or living conditions.

Virtual influencer will also not be offended if something needs to be changed in the finished campaign. When working with real people it would be necessary to re-record the scenes. In the case of Miquela the matter is trivial  — you just need to go back to  the stage of creating computer graphics (CGI)  and apply the corrections.

The cooperation of brands with real people is always associated with a  certain risk. You never know if a media character will  suddenly do or say something controversial. Companies with carefully prepared advertising plan are afraid of associating their logo with bad PR. Employing virtual characters is a great solution in this situation.

Moreover, there is no indication that created celebrities are less successful than the real ones. On the contrary — according to the  Hype Auditor polls from 2020, they are almost three times more interesting to the audience. Real influencers need to share about four times as much content on their social media to receive a similar amount of attention.

As proof of this it is enough to mention  that already in 2018  Miquela was among the  top 25 most influential figures on the Internet according to the TIME magazine. Together with her there were names such as  Kanye West, Rihanna or president Trump.

Forecasts for the future

We should remember that the virtual influencers market is very young. And since you already can achieve such amounts on it, it is  hard not  to think about the future of advertising, entertainment or even socio-political debates. After all, any way to influence the opinions of the people, without a proper regulations, will be used for someone else’s interest (see: Cambridge Analytica).

Looking at all these changes taking place in the background, are we sure that Brud is not reading us  War of the worlds bedtime ? When we open our eyes and it turns out that everything we know becomes new, better and more beautiful, will we be ready for it? And what if the virtual character will no longer be just dummies in the hands of human creators, but will be controlled by artificial intelligence? Will we be able to keep up with its constant improvements?

Cynthia ended her life when she slipped of her chair in a beauty salon and shattered to pieces. Shortly after that the press announced her death. No attempt at repair has helped her regain her former glory.